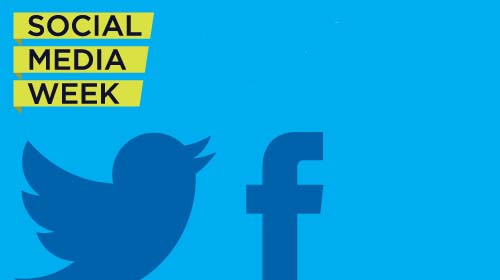 Okay, so once a year serious users of social media stomp out together as an army of tech-loving, iPad-wielding, facebook-ing, instagram-ing and tweet-ing geeks. And they aren’t ashamed to show it. This parade is called Social Media Week, or known by #smwldn in London.

You, yes you, like me and many many others are most likely a member of Facebook and probably Twitter amongst a myriad of other affiliate social media platforms. Interestingly Facebook, the leader of the social media boom, has grown so large that apparently if it was a country it would be the third biggest. In. The. World. Wowsers. That is scary stuff considering it only started a few years ago.

Social media has grown into the greatest, trendiest phenomenon in society AND a tool for businesses to use, with best practice tactics, measurements and content being highly sought after for today’s leading brands, bloggers and social media experts. This brings us to the buzz of #smwldn, a week that facilitates dynamic discussions, seminars and events across the globe on the social media frenzy.

I was lucky enough to be able to attend a few of the most prominent seminars on my personal interests – fashion and social media best practice – and I figured to embark on #smwldn I too had to become an iPad-wielding social media geek (which seemed to fit quite well on me tbh). Obviously with my own twist as I went with a cute Missoni-patterned notepad to match my iPad cover. Now is that #trendy? Or #colourcoordinated? Or #supergeeky?

The first discussion I attended for #smwldn was on Fashion and Instagram. It centred on how big brands can ‘empower’ their users to make content and aggregate interest for their brands through using Instragram. This action of ‘letting customers have a conversation of their own and speak for themselves’ it is hoped could lead to mass interest, sales generation and possibly brand devotion. For instance I am obsessed with WAH Nails on Instagram and I don’t even wear acrylics – I swear.  This beautiful and sought-after process is often called UGC, User Generated Content, obvs because users generate the content. Keep up.

The first thing I noticed about this seminar was just how chic and stylish these ambassadors for social media were, cementing the fact that this wasn’t just a techies game but an arena where fashionistas’ seemed to be maximising their creativity and style just as much as their knowledge of how to ‘share’ or tweet something. The stand-out insights from panellists Karinna Nobbs (a tremendous fashionista with a sharp bob and lecturer at the London College of Fashion), Kat McDuffy (Phd Student, blogger and vintage-extraordinaire) and Jonathan Pryce (big-time blogger, snazzy suit wearer and digital marketing consultant) whet my appetite for social media week because not only did they present accurate stats and great case studies, but through their own expert understanding of social media they underlined how great a companion social media is for the community of fashion lovers everywhere. In case you aren’t on Instagram find a friend and/or stranger and you will see that this fantastically visual platform is definitely the way forward, and that was basically the gist of what this seminar was about, sprinkled with interesting facts about the top players in the game, how-to advice and fancy pictures of websites. Great one though.

Day 2 for my #smwldn adventure included an early start at Beyond Retro followed by a trip to the Official Hub of THE Facebook.

I wondered why I had to trek to Dalston to learn about Pinterest with many of the previous day’s panel members (except for the inclusion of the stylish Sophia Zydenbos and the Head of PR at Beyond Retro) but I soon realised why they choose this quaint and trendy café in East London – it borders a Beyond Retro (awesome), sells great coffee and offered a sweet boyband-chair set up for the panel members which was too cute not to capture. 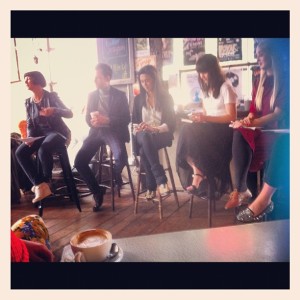 I won’t detail everything about this seminar (because there is a link to the slides at the end of this blog) and because to be honest I don’t really get on with Pinterest. It is similar to Instagram which I already love, wherein users share photos and like/comment about them, but you can ‘pin’ pictures onto ‘boards’ you create and there are some other funky additions too but essentially it shares a similar purpose. Again some extremely fascinating points were raised by the panellists including suggestions for cutting through what was affectionately labelled ‘the puppies and cupcakes of Pinterest’. Inspiration mood-boards and trend-tribe groups were the order of the day for Pinterest according to this conversation. But, the overall resounding opinion of Pinterest, from my perspective at least, was that it is a new ‘trending’ version of social media and aesthetically powerful because of its high quality images, however it is difficult to use for the first time and for me lacks that community feel that Instagram has already easily obtained. Therefore I say Pinterest- I aint got no Interest, even if the average user does spend between 45-90 minutes on you.

To crown the end of my social media adventure I decided to mix it up and attend a seminar not centred around fashion but from the perspective of a social media platform itself. I attended Facebook: Best Practice and Measurements.  After finding the doorway to THE Facebook and exiting the small lift to the show floor I took in my surroundings, expecting to see a white rabbit scuttle across my feet and the Mad Hatter to be sitting in a hammock with Mike Zuckerburg (Facebook founder – der). But to my discontent, although there WERE cosy-as-hell sofas and benches and other random chairs and ‘creative sh*t’, the ‘non-corporate’/ ‘we are your friends’ feel did not sit with the uber corporate seminar content which was about to ensue.

Facebook – Newsfeed obsession, utilising the ‘right-hand side’ and ‘telling stories’

For me using Facebook used to be fun, personal and somewhere to store my photos as well as obviously stalking my friends (be honest, we all do it). But a little while back Facebook kinda sold its soul (literally shares are available now) and started to morph into a corporate, ad-feeding machine which big brands like Amazon and Coca-Cola honed in on. This discussion started late because the wonderfully put together American dude hosting said he had just flown in from LA or something and obviously is so wrapped up in Facebook-world he had no comprehension of time. Anyway… Eric Edge, the name of the Head of Comms for Facebook and the host, genuinely provided amazing, fantastical stats about the greatness of using Facebook properly, which was actually really insightful and I felt useful for businesses. The innovative Facebook strategies, such as utilising ‘the right-hand side’ (for Facebook workers it cannot be called advertising) in order to remain on ‘newsfeed’ and revealing that users are 100-180% more likely to engage with photos/ videos than just text were great to know BUT Eric’s one-line sales pitches sprinkled throughout were gaggingly great and overtly obvious.

Eric was waxing on about how ‘newsfeed is the newspaper headlines of our personal lives’ and spewing one-line anecdotes to market Facebook about how ‘each page on Facebook is a personal story in our lives which we must tell’ blah, blah, blah. All the while the tech saavy army surrounding this dude are – or at least should be – aware that Facebook, even with its spectacular following, is being outgrown by its newer companion Twitter. Twitter allows for what us social media geeks call, ‘organic growth’, in terms of the way conversations and trends evolve and provides a less stringent and controlled version of communication. Hashtags from Twitter have now become a part of #everydaylife. AND to top it all Eric didn’t even allow for questions as if Facebook can no longer be questioned. Apparently Facebook speaks for itself (see below). 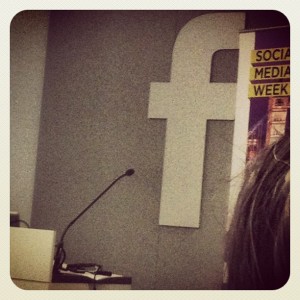 #smwldn was great and in particular the fashion discussions were insightful and engaging, if not for the eye-opening content of the seminars then to see the marvellous outfits of the most stylist social media soldiers of today. One thing though that I cannot shake is the looming shadow of ‘corporate Facebook’ and how it’s evolving nature has unveiled a nastier side to social media, which I think Twitter is trying to evade as it still essentially represents a more social and community driven platform. That said please feel free to add me as friend on Facebook if you like this or disagree with my views but definitely give me, and even some of the fashion panel members I cited, a follow on Twitter for sure. To be truly social of course.