In the past year I have started cycling in London and I honestly love it. When I tell people I cycle it normally provokes one of these two reactions “You must be nuts” or “I love the idea of cycling but aren’t you scared?” The truth is I am scared as I sheepishly cycle around the backstreets of Hackney, midst what I can only describe as a sea of hostility from motorists and pedestrians.

As Nick Curtis writing for the Evening Standard recently pointed out the greatest trick the motoring lobby ever pulled was convincing pedestrians that cyclists are the problem. The truth is not a single pedestrian has been killed by a cyclist in London in the past 10 years, yet Curtis found himself receiving a £30 fine for cycling on the pavement at Chelsea Embankment. 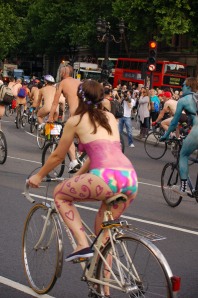 Despite our Mayor Boris Johnson shouting from the rooftops about how much he enjoys cycling, a host of anti cycling policies are being implemented across London. Last week it was announced that cyclists will face a £200 penalty if caught riding in the “Games lanes”. In case you are wondering these are new lanes to be laid down reserved for speeding Olympic VIPs across the capital.

And cyclists continue to be fined for jumping red lights in a bid to avoid injury. This flies in the face of other cycle-friendly cities such as Stockholm, where they are testing a scheme where cyclists are able to jump red lights.

Cycling has a myriad of benefits not only for your personal health, it is also is an amazing way to cut down on your personal carbon footprint. It is an incredibly important issue considering London’s alarmingly high levels of air pollution (the worst in the UK) and among the worst in Europe. London’s polluted atmosphere is thought to be responsible for over 4,300 premature deaths per year.

Since starting cycling I have felt fitter and happier and met some wonderful people. Cycling fosters a community spirit. I have found that other cyclists have been incredibly helpful to me as a newbie, helping me to fix a puncture, change a chain and generally not injure myself. Maybe it is that as a community, London cyclists know they are involved in a risky business, with pedestrians, buses and taxi drivers all viewing us with suspicion.

Despite the suspicion and risk I would urge everyone to dust off their old bikes and give it ago. The wind flowing through your hair and the ability to dash around exploring new places for free and knowing you’re helping the environment is an amazing thing.

Cycling is definitely thriving. Take the Tour De Dalston; an event organised by Juilet Chard of Climate Rush, which took place last week as part of the Two Degrees festival of ‘Art and Activism – Climate and Cuts’. I turned up only knowing one person but by the end of our ride across Hackney I had made lots of new wonderful cycling friends and learnt that I do have a creative bone in my body.

This sense of community and caring for other cyclists is lovely. Wouldn’t the world be a better place if drivers had similar respect for one another?

We must urge Boris to fulfil his motto displayed on the GLA website: “I believe that the cyclised city is the civilised city”.

Here is a video of what can happen when cyclists are treated as invaders on the road: