I wasn’t really sure what I was expecting of the V&A’s current major exhibition Postmodernism: Style & Subversion 1970-1990 because the problem with postmodernism is that is it so damn hard to define. From the promotional image of Grace Jones, I expected lots of bright 80s pop culture references but actually the exhibit aims to cover everything from art to architecture, clubbing to music. With the promotional video fast-cutting between so many different subjects,  I wondered how they would fit it all in.

The answer to this question reflects the very nature of postmodernism itself: they decided to just stuff the lot together. The very definition of postmodernism (if it has one) is to sample inspiration from the past and put it together in a beautiful pastiche. This has promoted some criticisms from other reviewers. TimeOut complained that the decent art works the exhibition did have were placed so badly, it was impossible to appreciate them. I have to say, I went on a weekday and there are parts of the exhibition that are so packed in, I wondered if this would be a problem when was is busy. The exhibition presents us with some  pieces of questionable taste, for example a coffin in the shape of a car, and challenges the viewer to make their own mind up by placing them alongside more respected work and well-known work.

The house Robert Venturi built for his mother shocked the architecture community at the time, Philadelphia 1962

The exhibition starts with an overview of where the movement started in architecture. As a bit of an architecture junkie, I found this really informative and fascinating. The exhibition explained how postmodernist architects like Aldo Rossi and Robert Ventri were rebelling against Modernist idealism and trying to find a form of design that would protect them from what they saw as the increased alienation and decay of capitalism. The Modernists had believed that with order and simplicity they could create a Utopian society. However, as a housing project in Missouri exemplified when it became a hotbed of crime and had to be pulled down just 16 years after completion, Modernism failed to achieve its dreams for unison. The outcome of this was a mish-mash of architectural influences being used for purely aesthetic purposes: a bricolage of cultural references both high and low, past and present. Las Vegas in the 70s is a perfect example of a postmodern city, with all it’s flashing lights and faux classical buildings rising like a mirage from the desert.

James Vines showroom for Best, Texas 1975. The decaying nature of the building itself symbolises the decay of Modernism's ideals

Having felt I really understood what Postmodernism meant, the exhibition then moved onto home wares and interior design, which included Mickey Mouse tea sets, futuristic vacuum cleaners and crazy lamps, by way of Vivienne Westwood and a projection of a clip from the film Blade Runner. Then suddenly we were thrust into the New Wave club scene of the 80s and I started to get a bit confused. The exhibition explored pop culture’s fascination with superficiality and consumerism, giving way to postmodernism’s supposed downfall which was that it the couldn’t escape its own commercialism. We saw Jones, Warhol, Lagerfeld and i-D magazine before New Order asked us if we really knew who we were anymore. 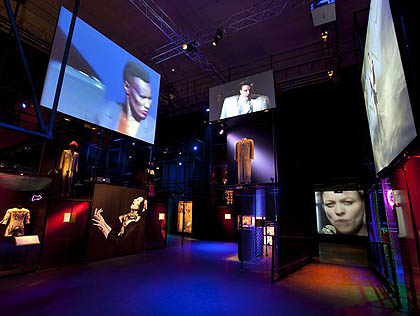 Interior of the exhibition 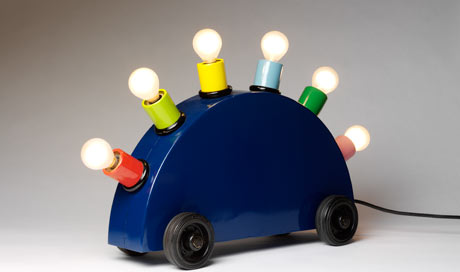 One thing that really struck me as being problematic about an exhibition about Postmodernism is that it’s not clear that it is really over yet. The curators chose to stay between 1970 and 1990 but watching the Grace Jones’ videos, I couldn’t help but note that the stylings of Gaga and Rihanna haven’t moved on very much at all. Also the values that make Blade Runner Postmodern such as sampling different genres, such as film noir, and mixing them with modern themes are exactly what lots of directors are still doing today. Some people have criticised the exhibition for not being very clear, but maybe that is exactly the point, Postmodernism isn’t very clear. Does Postmodernism really exist as a clear genre or are we still just rebelling against the ideals of Modernism without a clue how to find a better solution?  With all the stresses and uncertainties facing our society today, are we still pacifying ourselves with the aesthetics and ideas of the past because we don’t actually know how to move forward?

Jenny Holzer’s Times Square Billboard, 'Protect Me From What I Want' ,1983-85 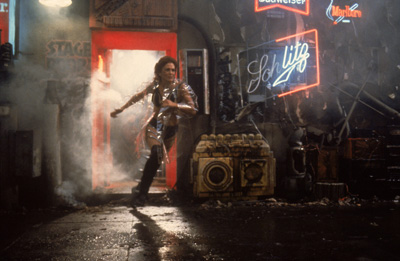 Clip from Blade Runner, where the fake humans think they are real