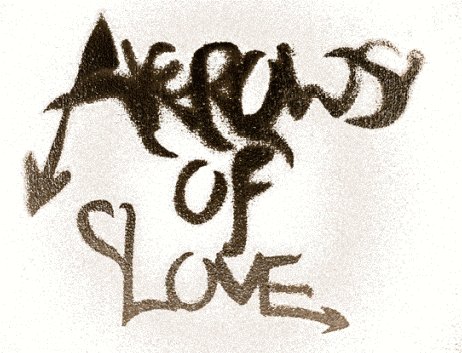 Flannel shirts, Alice in Chains, Love Buzz – no this wasn’t one of my grunge wet dreams, this actually happened. Nirvana, Live Tonight was playing on the TV screen and post it notes with song requests adorned the wall. It seemed Soundgarden, Mudhoney and L7 were the flavour of the day. Touch Me I Am Sick had arrived at the Victoria in Dalston and there wasn’t a synth in sight.

Headlining the evening were the Arrows of Love. I was definitely intrigued by this band as they definitely had the look down, but the real question was, could they play? I quickly discovered the answer was yes,. Arrows of Love had adopted the soft/loud model pioneered by the Pixies 25 years earlier and constantly changed tempo, keeping the audience on edge.

The lead guitar work was exhilarating throughout, cutting through the power verses without dominating the tempo of the songs. At times the bass was used as like a lead guitar reminiscent of long forgotten grunge band Failure’s album Magnified. And above all, it was really noisy; the lead vocals however probably owe more to Julian Casablancas than Kurt Cobain. By the end of the gig the crowd of mid twenties grungers were bobbing around furiously.

In true grunge tradition the band attempted a bit kit destruction set which saw the lead guitarist in with the crowd throwing around his guitar. It certainly sounded and looked impressive. The band exited the venue with their instruments still ringing, although the guitar lying on the floor looked like it would live to play another day.  On writing this article I discovered Shellac’s Bob Weston will be mixing their upcoming album and I have to say I can’t wait to hear it.