Cartagena at sunset, between Getsamani and the Old City. Image: Alan Chant

This 12-month Panamerican adventure has been full of surprises; birdwatching is now an active hobby (the birds of Central and South America are beguiling). I’ve learnt things about myself; I can actually survive without exfoliator but am unswervingly intolerant of certain nationals (can’t mention names, but they talk loudly about themselves when nobody has asked and are constantly planning their next interruption). That’s not one i’m particularly proud of, but I am afraid it is true.

My wilful exile has also brought me closer to my first love, London. I miss it so. We were having a bit of a lovers’ tiff before I left, but absence most certainly does make the heart grow fonder and I am smitten. I wish I could have been transported back a couple of weeks ago to play in the snow with you all and complain about trains. Oh it’s SO bloody HOT, here.

Me and the boyf are now nearly 4 months into our trip and PRAISE BE, we’re in Colombia.

Colombia – after the cultural and foodie vacuums of Gringoland (Costa Rica and Panama) – promised to take us back to the exultation of Mexico at the start of our trip; addictive and cheap street eats; fiery but friendly locals; safe cities with plenty to do and see; and richly diverse small towns and villages yet unmarked by the pocks of tourism and the footprints of flip-flopped holidayers stampeding to the beach. And by gum, it is not disappointing. If it wasn’t for the endless and repetitive Cumbia music I could stay here forever.

There is no official land border between Panama and Colombia and trekking through FARC territories is extremely unwise, so we flew from Panama City to Cartagena, terminating our bi-continental bus junket, which started in Nuevo Leon in Northern Mexico, at just short of 3000 miles. 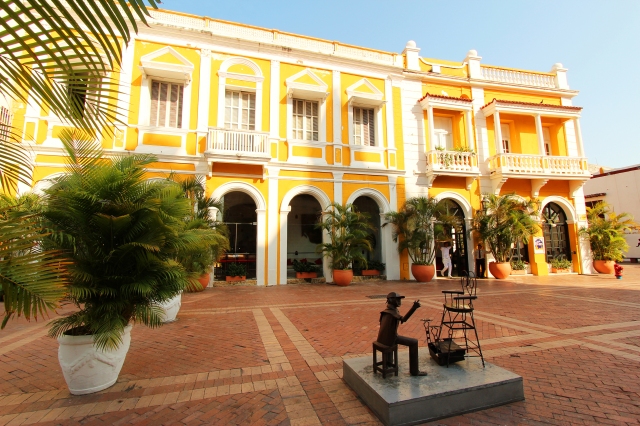 Cartagena should challenge Buenos Aires to a bloody fight for the title of the “Paris of South America”. I hereby dub thee the “Paris of the Caribbean”. It’s so much more than the setting of that shitty 80’s movie with Michael Douglas. Due to its walled defenses, built in the 16th century to keep out saucy pirates like Francis Drake (who sacked the city in 1586), it has managed to retain its original colonial beauty, while other Latin American cities rebuilt on top of ruins.

Cartagena’s attractions are its streets. We spent six blissful days just strolling the walkways and fortress walls, trying exotic new fruits like guayabana and caimito and sipping freshly crushed cane juice from the market stalls (amazingly refreshing with a squirt of lime). After dark, we sat amongst the costeños (Cartagenians) in the softly-lit plazas, with an arepa con queso and an ice-cold Club Colombia beer.

There are the tell-tale signs that Cartagena is a prominent stop on the cruise scene, but we found it easy enough to ignore. Each Bougainvillea-trailed street displays about five emerald shops and an abundance of boutique hotels and high-end restaurants. In narrow streets, imposing doors of thick mahogany, with heavy bronze knockers revealed grandiose, flowered courtyards. It will surely change very quickly as Colombia opens up to previously wary travellers, but tourism has yet to spoil Cartagena, unlike so many pretty colonial cities we visited in Central America.

Doing Cartagena cheap is still an option. We don’t have the Bens of your average Caribbean cruise passenger and we got by just fine without feeling like we missed out. Like the rest of Latin America, budget eating means dining with the locals. La Mulata was a favourite of ours; a smart little café with a choice of four set meals each day of Cartagena’s specialty; sea food. It was there that I discovered a dangerously addictive drink called Limonada de Coco, a Caribbean twist on classic Colombian limeade, native to the city. And when our budget ran tight, dinner was at an empanada stall in the Plaza San Diego, family-run for over 45 years and crowded with costeños.

Cartagena has a proudly mixed heritage. Its Caribbean spirit compliments its Latin in a rich and colourful marriage, from its dishes of coconut rice and fried fish, to the typical West Indian dress of the Afro-Caribbean woman fruit sellers.

But there is less to be proud of that the city can hide from most, but not from others. Just as Gabriel García Márquez envisioned love in a time of cholera, crimes of the body and soul are hidden by the modern passion of Cartagena. The scars of the colonies still ache in a city alive. Each day we would walk from our hostel in the ex-slave quarters of Getsemani, now a shabby but welcoming neighbourhood just outside the old city walls, through a shadowed and cool archway of El Plaza de la Paz, to Plaza de los Coches, a lively and brightly-coloured square where slaves were auctioned. A statue of Spanish Conqueror and Cartagena’s founder Pedro el Heredia stands there now, among the tables and chairs set out for travellers to spend a sticky evening drinking among the locals, deaf and blind to the sale of human bodies that once surrounded them.

Cartagena is beautiful. But it is a former slave port, shipping in West Africans to be traded all over the Americas, as part of the ‘golden triangle’ of European slave trade. This haunts me. Maybe it is because my study of the slave trade opened my eyes to the depths of barbarism in the individual acts of slavery, but I think it should haunt you too. As hard as it may be, if you visit, try to take a moment to acknowledge the fear and bewilderment of an African stepping off the boat in shackles, taking in the first sight of land on a continent that will sell her/his body.